Pipe jacking is a method of tunnel construction where hydraulic jacks are used to thrust concrete pipes and culverts without disrupting existing surface facilities in various jacking distances and ground conditions.
Concrete pipes and culverts are jacked from a jacking pit to a receiver pit. The main jacks are installed in the jacking pit and are used to push the concrete pipes into the cavity excavated ahead of the progressing pipeline. The main jack capacity (two to four jacks with a capacity of up to 300 ton) depends on the size of the pipe, length of line, and type of ground.
Pipe line alignment is continually monitored and adjusted during jacking by laser from the jacking pit. Gradual adjustments are continuously made to avoid over-stressing the concrete pipe joints.

Horizontal Directional Drilling is used in the process of installing HDPE sleeve pipes from 75mm to 800mm diameter. Pipe Jacking is used for the installation of concrete pipes from 900mm to 2400mm, as well as large concrete culverts. 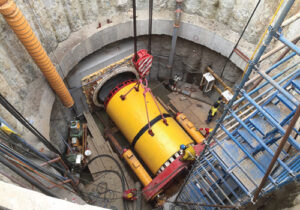 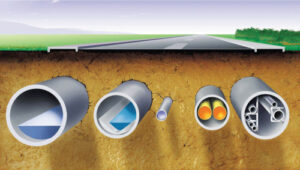 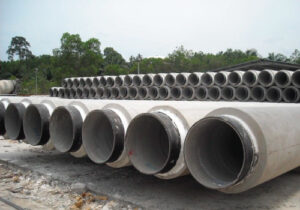